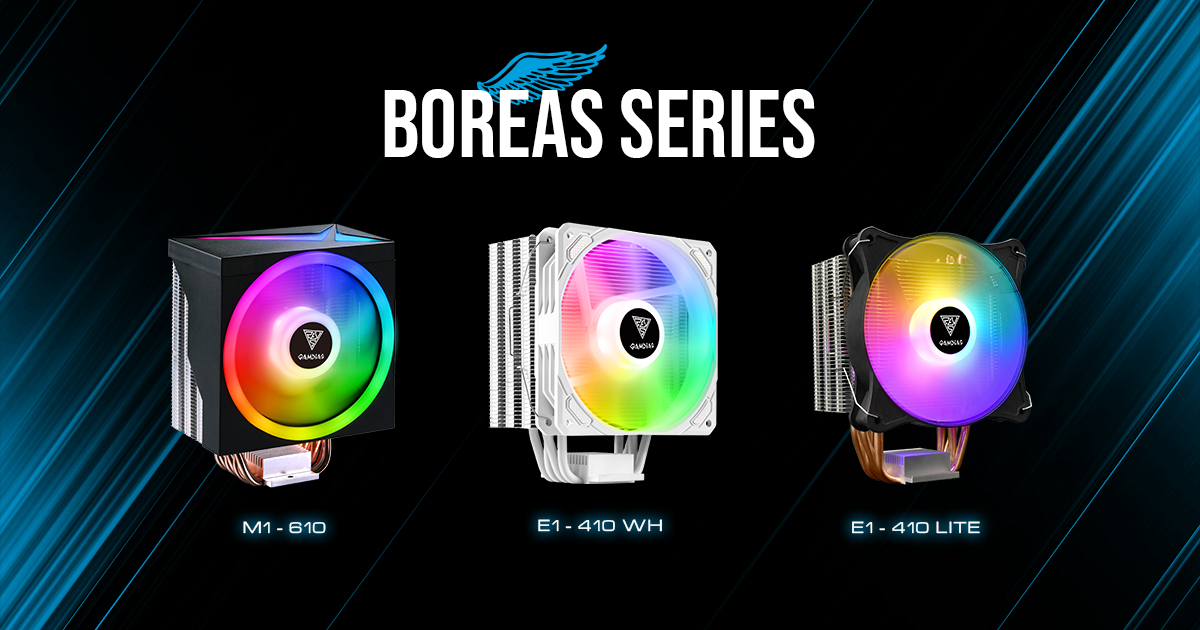 BOREAS has been the trademark Air Cooler Series at GAMDIAS that emphasizes performance and aesthetics. Each and every model retains exemptional thermal conductivity and airflow control using a high-quality aluminum base plate featuring the GAMDIAS Heat Pipe DTC technology that allows the CPU to transfer heat without obstruction. The coolers are also equipped with PWM functions to satisfy every gamer's desire for performance. Use the superior performance and elegance of the BOREAS air cooler models to bring the cooling performance into the case and win with the Northern Winds. 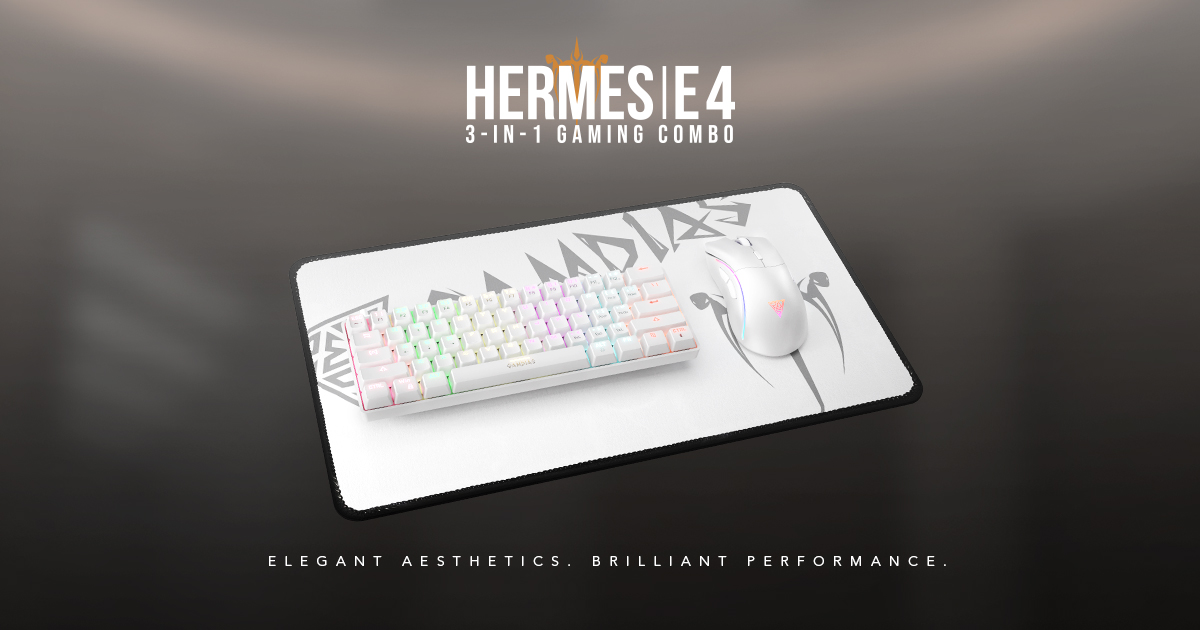 The all-white, elegant, and high performance 3-in-1 gaming peripheral combo: The HERMES E4 3-IN-1 COMBO

GAMDIAS has been releasing very budget-friendly gaming peripheral combos since 2014, and it is our obligation to give you the best PC peripherals for the best pricing. And this time, we step up our game to give you an all-white premium combo with no compromises to quality. Our 3-in-1 gaming combo includes a white multi-color mechanical 61 key form factor keyboard, a precise RGB mouse with an accurate 12800 DPI, and finished with an extended reinforced white mousemat. We have made slight tweaks to all three included products for them to better fit together as a whole and provide you the best gaming experience possible with our GAMDIAS gaming gears. 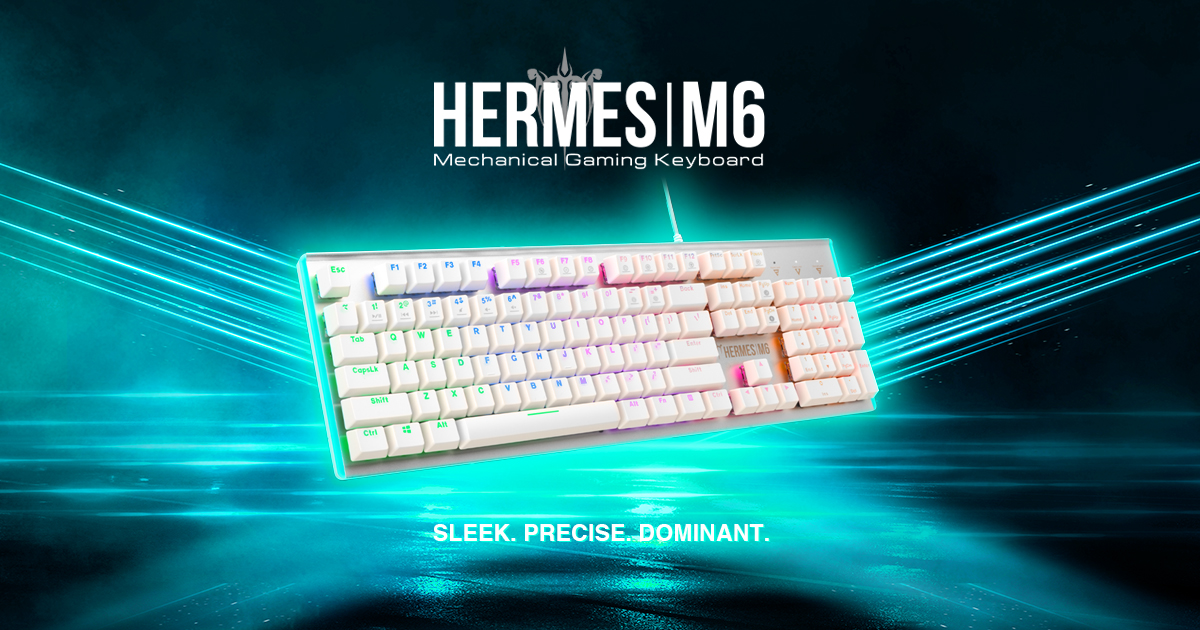 HERMES M6: The Voguish White Mechanical Keyboard for all!

The aluminum-bezel-styled metallic front plate has been the trademark of the GAMDIAS HERMES series since 2017. Every one of our HERMES keyboards has been constantly refined and improved throughout the years to give each and every one of our product users not only the best gaming experience possible but pleasing to the eye and maybe your wallet. And with the HERMES M6, you get a premium mechanical keyboard that features all of the signatures of our GAMDIAS mechanical keyboard and more! 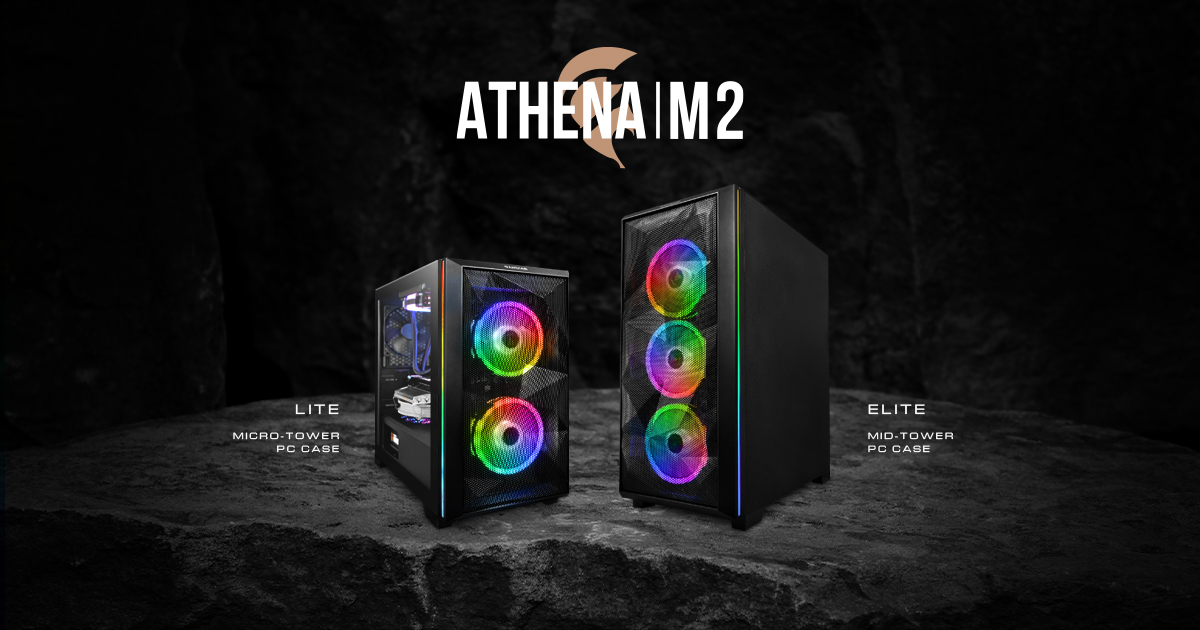 Our ATHENA cases define themselves with a clean-cut asymmetrical mesh case design to allow more airflow along with ARGB fans to provide not only performance but top-tier aesthetics. One of our best-selling mesh mid-tower cases, the ATHENA M2, is now out in both ELITE and ELITE versions. While retaining all its features, including a front asymmetrical mesh, built-in ARGB fans, and light strips on both sides of the case, it now comes in two more sizes to add more customizability to your build. 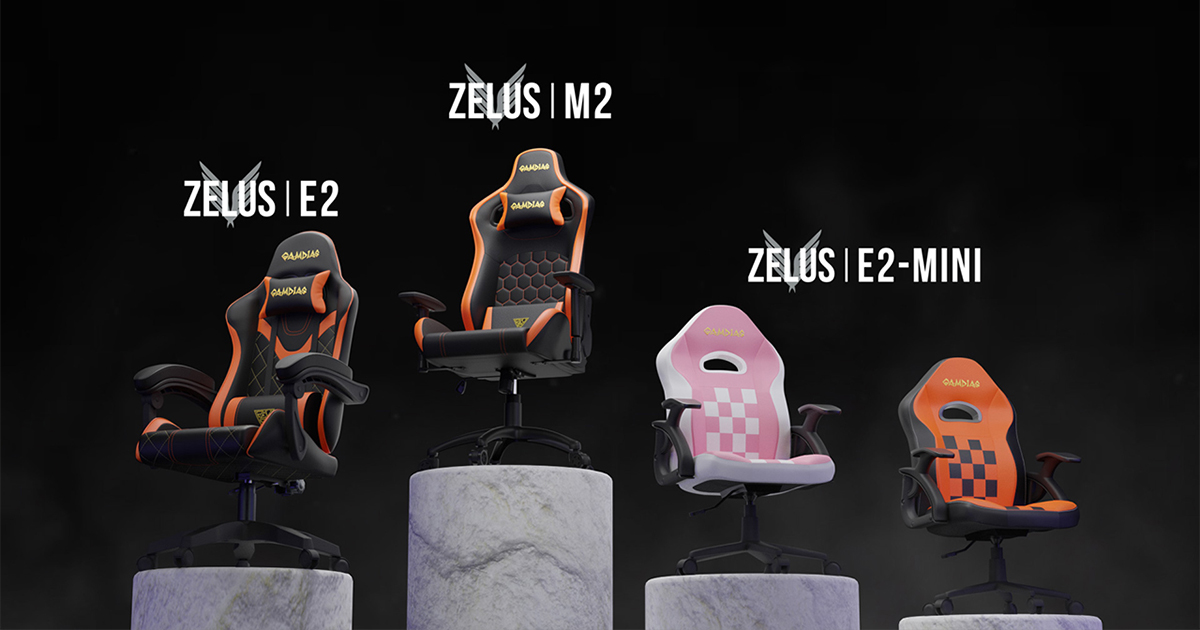 It is our duty to provide gaming chairs that you get a buck for the buck without paying all the premium just for the branding. Our new ZELUS 2nd generation series lineup is filled with gaming chairs where you can get your money's worth. Two entry-level chairs: the ZELUS E2 MINI and E2, provide the best comfort tailored to your frame and size. And a mid-range price range chair: ZELUS M2, giving you top-of-the-line stability and a premium ergonomic feel for long-haul gaming sessions. 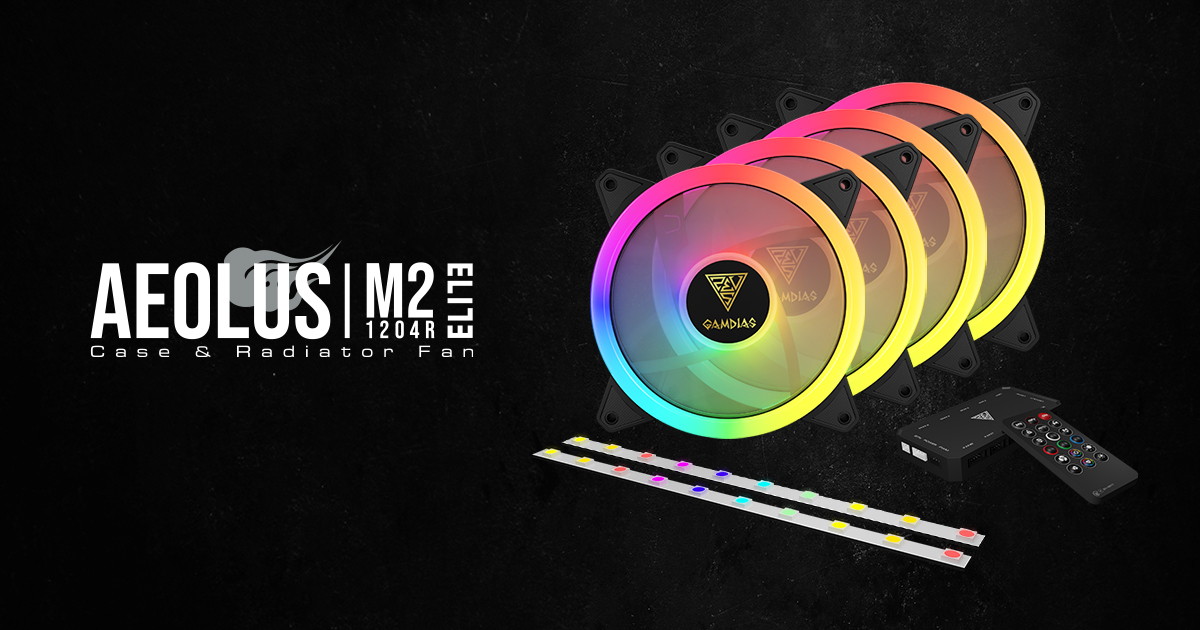 Glamourize your setup with the all-new AEOLUS M2-1204R ELITE: A 4-in-1 ARGB fan combo with 2 ARGB LED strips.

Our AEOLUS fan lineup has always been about providing better cooling and build experience for your PC. We decided to add another fan combo to the lineup with additional LED ARGB light strips along with a 4 PWM fan pack combo to give you more customizations on the cooling and lighting of your rigs. The contents of the products include our AEOLUS M2 trio-ring ARGB fans with PWM function, 2 additional LED light strips to sync your environment along with your fans via the included AEOLUS box and controller. The AEOLUS fan series has always been one of the top-quality budget fans you can get on the market. We strive to improve every aspect of the fans while keeping the price just right for users to upgrade their builds without care. 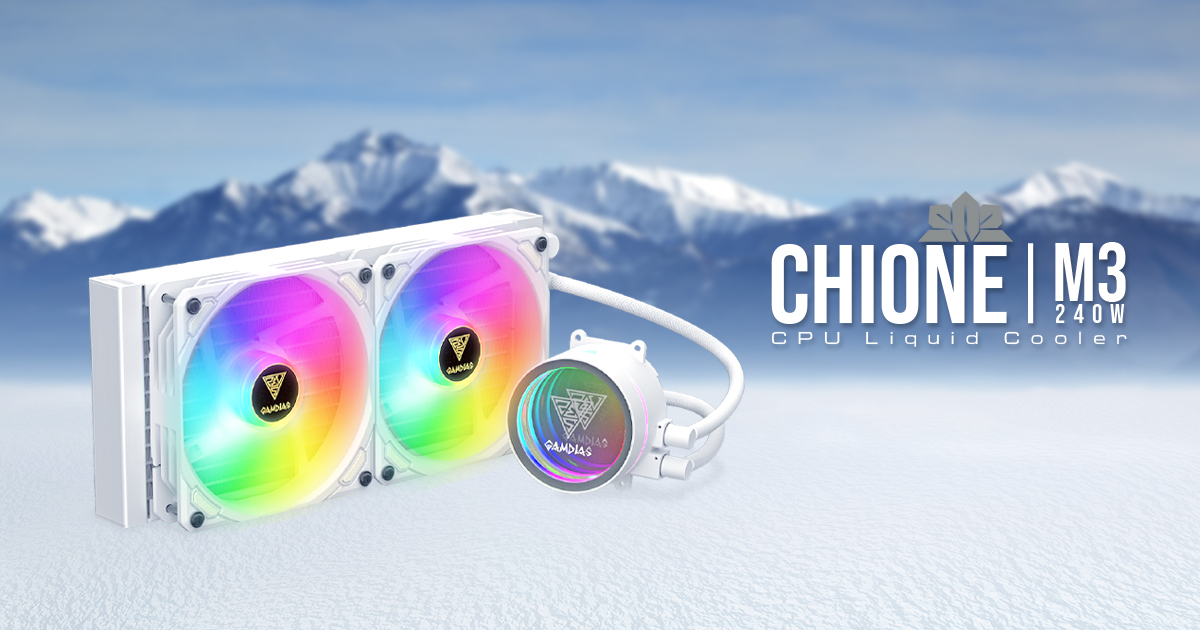 GAMDIAS is ecstatic to announce the newly released White PWM Liquid Cooler, the CHIONE M3 240W, featuring an infinite mirror water pump, ARGB PWM fans, and gives your rigs a fresh new look. The 3rd generation of our CHIONE M-series aim to provide your heatsink with not only better performance and cooling, but also to further exemplify your already good looking chassis. The CHIONE series is GAMDIAS's signature liquid cooler series that has been constantly refined ever since the first release of the product line in Q1 of 2018. Our initial launch of the CHIONE Liquid Cooler series have been a massive success as it matches up to the competition with the affordable price for everyone. As we head into 2022 where everything is about performance, elegance, and innovation, we decided to release the combination of everything the market wants in a liquid cooler: an ARGB infinite mirror pump, snowy white durable hydraulic fans, supported by high performance PWM connector. The all-new CHIONE M3 240W retains itself as an ARGB all-in-one cooler while gearing up to be one of the top performing budget coolers on the market with its design and functions. CHIONE M3 240W is essential for anyone looking for an aesthetically pleasing liquid cooler with better air pressure, airflow, performance, and extraordinary visual effects. Redefine your battle station with this ultra-modern powerhouse! 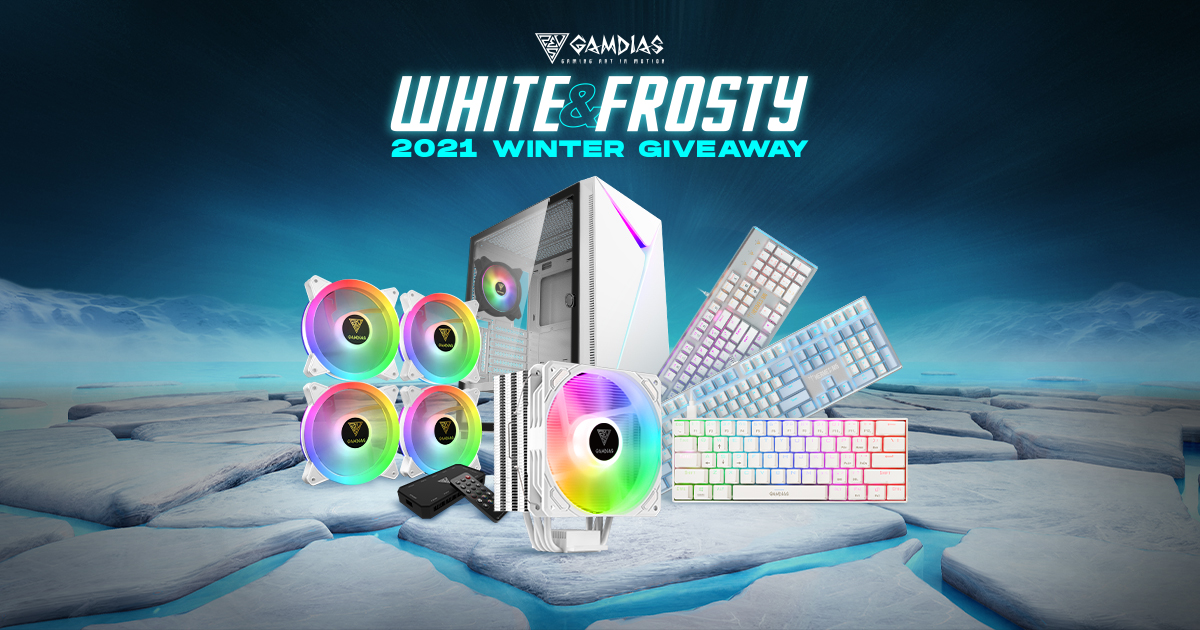 To celebrate the holidays with our supporters, we are giving these 6 must-have white PC peripherals and components to three lucky winners. 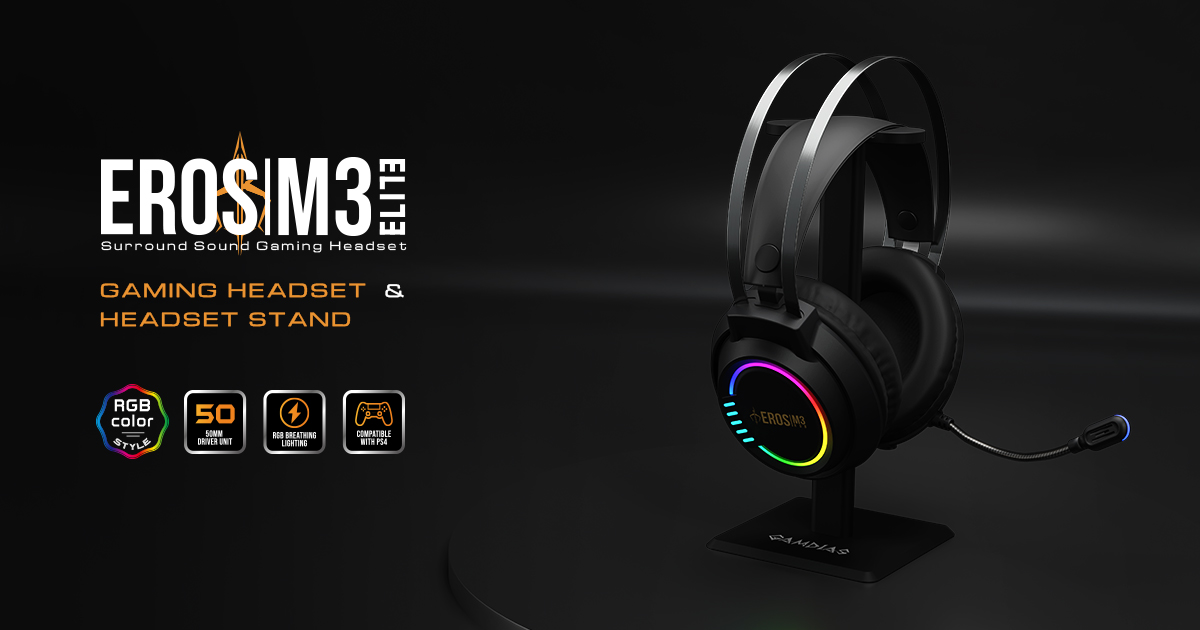 Minimalistic and optimization seems to be the trend in 2021. As we add the EROS M3 ELITE into our Virtual Surround Sound headset lineup. The audio-rich surround sound gaming headset features a unique and myriac RGB streaming light on both sides of the headset and a bright stream of LED light at the tip of the microphone. Along with a sleek and black headset stand to help organize your setup easily. The EROS headset series has been GAMDIAS's "best-in-budget" headsets, getting you the best performance and quality you can get with each buck you spend. To keep up and perform along with the competition on the market with a mirror or lower price, our GAMDIAS design team have constantly put more emphasis on the practicality and the aesthetics of the finished product of our EROS headset series.